What Do You Do In A Bear Market?

The returns achieved by stock market investors over the past century have been phenomenal. The historical annual return for US equity investment sits at 5.2% after having been adjusted for inflation (and clocks in at over 11% unadjusted). Equity investments have time and time again proven to be the most appropriate combatant of inflation, producing returns far in excess of the rate of inflation over medium and long term time horizons. Inflation itself is the most insidious of all investment risks. It is a slow and systematic erosion of value over the cash holding period and is commonly subordinate in the minds of many investors, to the drama of a precipitous market crash.

Why Do Wealthy People Use Financial Advisors? 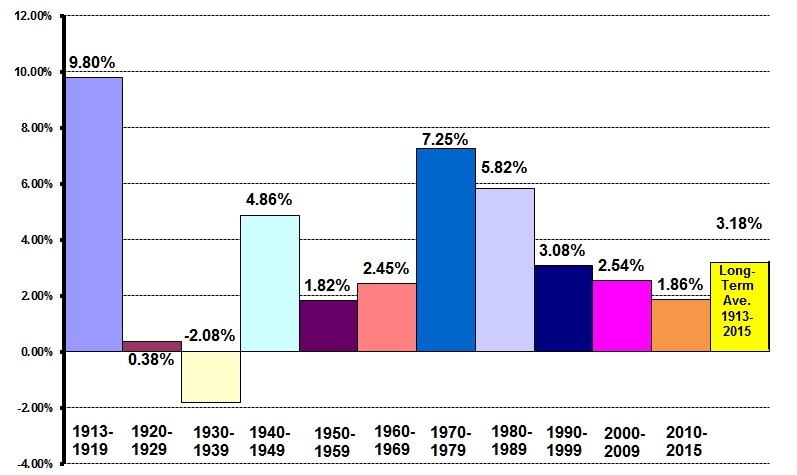 It may serve long-term investors to remember the old adage that “you’ve got to be in it to win it”. Although it is doubtful that this was conceived of in reference to equity investing, there are few other situations whereby it can be seen to be quite as true, and as empirically so, with such a wealth of supporting data to confirm it. Successful long term investing is predicated on an almost zen-like understanding that you will, for a period of time, lose money. Investing in markets which are largely cyclical means that you will participate in both ascents and descents. As you yourself are not the driver on this road, this should not surprise or perturb you. In spite of this universally understood fact, losing money (especially at speed, as in a market crash) can paralyze the logical brain and engage a more primitive defense mechanism- flight. The good news is, you need not “fight” to win the game. If anything, you would do best to ignore the battle entirely, and take solace from over 100 years of data which unequivocally states that you should remain invested at all times.

Behavioral finance can help investors to understand their own decision making process and biases before attempting to navigate and interpret investment markets and their stimuli. Loss aversion in investment is a well-known behavior trait by now, but awareness alone does not constitute a cure. Studies have shown that losses are processed in the same part of the brain that responds to mortal danger. The moment our feeling of “loss” is activated we are immediately aware of our pain threshold, and start to point one foot toward the door. Investors and financial history tend to remember the bad times more than the good. Memories of joy are outlasted by those of pain.

How To Change Your Financial Advisor
If we are to consider a “bear market” as a 20% price decline from a peak, then we can calculate that since 1929 the average bear market loss has been -45% and lasted for 25 months. During this same period, the average bull market gain has been +151% and lasted for 53 months. The odds of making returns on a long term basis are asymmetrical, and entirely on the side of the investor. This methodology could however be mitigated by bad luck (bad timing); by removing the money at the wrong time. The solution: do not remove the money if you are only to re-allocate it again later in pursuit of returns. Your timing will be imperfect. The market will look after you in the long term. Do not question it in the short term.

How Do You Make Money In A Bear Market?

Many people will ask the above question, but will seldom ask “how do you make money in a bull market?”. Perhaps surprisingly, the answer to both questions is the same- remain invested. If scholars the world over unanimously agree that time reduces risk, and the best performing asset class is not predetermined and is prone to change annually, then it should not be too much of an extrapolation for investors to ascertain that the best conditions for production of growth are diversification and patience. Maintenance and adherence to a long-term view will be testing during periods of market decline but the success of any investor will be predicated on her ability to stick to the plan, without deviation.

If a person invested 100,000 USD in the S&P 500 index in 1996 and took it out in 2015 (20 years in total) they would have received a +478.2% return. If the investor missed just 10 days during that 20 year period this return would have reduced to +86.7%: a reduction of 391.5% . If the investor had missed 25 days during this period (that’s 0.34% of the total investment period) their total return would have been +20.2%. That’s 458% less than the investor who left his investment alone and did nothing. The caveat to this example is that the missed days happened to be the best performing days of the index. Although it is statistically unlikely that an investor would, through poor timing and over-activity, miss the best performing days of the market consistently over a 20 year period, it is just also just as statistically unlikely that, over the same period, their guesses about when to best enter and exit the market contain these periods of growth and not loss. 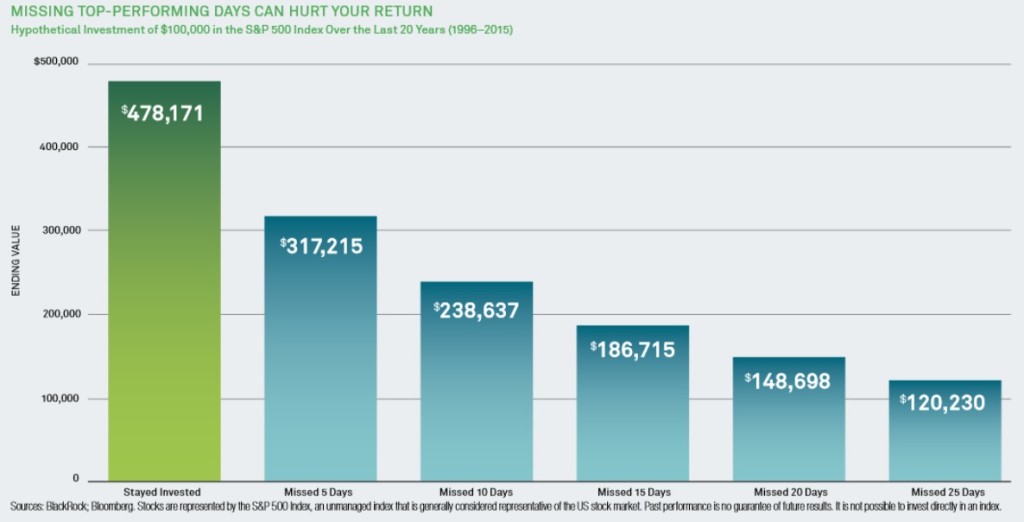 - Your Money and Your Brain: How the New Science of Neuroeconomics Can Help Make You Rich Paperback – September 16, 2008 by Jason Zweig