In Japan, inheritance tax is levied not on the deceased themselves or their estate, but on each individual that has received the inheritance or gift in the taxable year (beneficiaries). Whether the inheritance tax is in fact applicable is determined by whether or not the person currently, or has in the past maintained a domicile in Japan, whether or not the inherited or gifted assets are located in Japan, and if the recipient is a Japanese citizen. The changes implemented in this year’s tax reform were problematic for the foreigner and expat community located in Japan, as well as those considering to work temporarily in Japan at some point in the near future. Among the changes, the primary alteration has to do with inherited property that happens to be located outside of Japan, and for assets inherited by a foreigner that has only temporarily lived in Japan. Also included in the changes, are conditions that aim to prevent Japanese nationals hoping to get around the inheritance tax laws by temporarily moving out of the country.

Prior to this year’s changes to the inheritance tax system in Japan, the potential for tax liability could be summarized as follows: Tlthough this could be appreciated for its simplicity, it left much to be concerned about for foreigners living in Japan who had no intention of making the country their new and permanent home. As the code was written, someone working temporarily in Japan, whether they happen to pass away with significant assets or come into inheritance while living in Japan, the Japanese government would technically be claiming not only Japan located assets, but also non-Japan assets.

For example, a foreigner comes to Japan on a temporary work assignment, and while living here his grandmother passes away, leaving him a million dollar home. Now, grandma and the parents had already sorted out their affairs in his home country to ensure there was no, or minimal tax payable. However, under the previous Japanese system, he could be liable for hundreds of thousands of dollars worth of inheritance tax in Japan. This temporary work assignment just got much more expensive than anticipated. For this reason, it was postulated that a significant number of highly skilled foreign professionals and executives were being discouraged from considering positions in Japan, thereby hindering the Japanese economy.

The new system is more lenient to non-permanent foreign residents, and tax liability is assessed under the following grouping of potential scenarios: 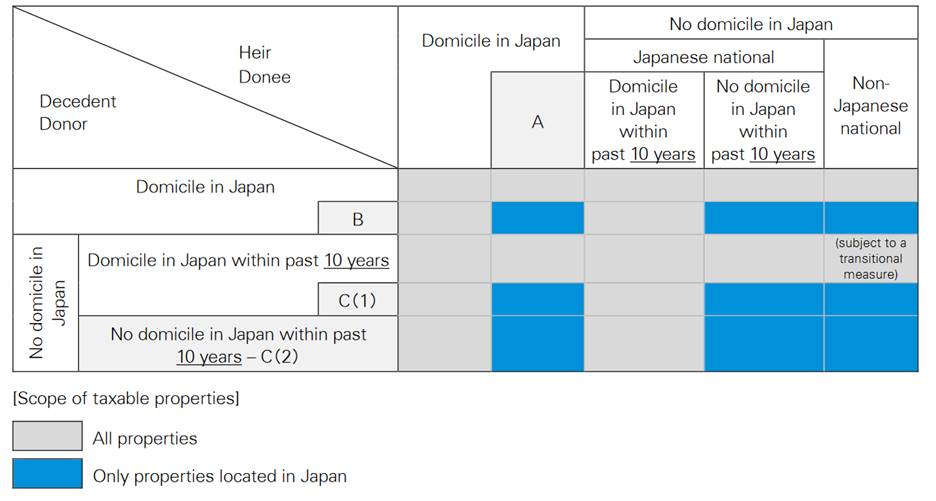 Although slightly more complicated than the previous system, it is worth taking a moment to read through and understand the various scenarios to see if you currently, or in the future, could be subject to inheritance tax.

There are a few changes, with the most prominent being the impact of inheritance tax on foreigners who have only been in Japan for a short period of time. For example, if you have been living in Japan for 10 years or less, only assets located in Japan will be subject to inheritance tax. In the above example, the temporary worker would not be taxed on receiving grandma’s home overseas. If, however, he decides to renew his visa a few times, and has been in the country for more than 10 years, regardless of receiving his eijuken (permanent residence status) or not, the overseas property would become liable for Japanese inheritance tax if grandma passed away after his 10 year mark.

Although on the surface it can seem complicated, the new system is regarded as a much more fair and reasonable approach to taxation of inherited foreign assets. This does not however mean that foreigners living in Japan can stop worrying about any overseas inheritance that may be coming their way in the future. After crossing the 10 year mark, the Japanese inheritance tax system returns to its strict roots; and one would be advised to keep up to date of any future changes or reforms to the tax code that are sure to crop up from year to year.