What is QE (Quantitative Easing)?

Anyone watching the news in the last six years has likely heard the term “Quantitative Easing” with quite a bit of regularity.  However, for many people this terminology falls on somewhat deaf ears and many that know the basic definition of quantitative easing might still not really understand what it really is, why it exists, and what impact it may have on their lives.

Simply put, Quantitative Easing is the act of central banks (for example, the US Federal Reserve, or Bank of Japan) purchasing bonds.  Central banks began buying mortgage-backed securities and government bonds during the height of the crisis in 2008, and have continued through to present day.

What is the purpose of Quantitative Easing?  Central banks have a number of tools available to them to try and “boost” the economy.  In the past,  the most favored too has been to lower interest rates.  Lowering interest rates makes it cheaper for businesses to get loans and expand (hire more employees, build new factories/offices, etc.), and it makes it easier for individuals to get loans to purchase a home.  However, because the interest rates were already low, the central banks decided to explore other means of “boosting” the economy.

The central banks essentially have the power to “create” money (on TV they refer to this as “expanding the monetary base”) by purchasing government bonds with money that did not previously exist.  As of the time of writing this article, the Federal Reserve was purchasing $55 Billion of bonds each month.

This performs an essential role of “providing liquidity”.  In simple terms, “providing liquidity” means that institutions (large companies, banks, even governments) are able to continue paying their long term debt and the interest on the debt, as well as cover any gaps in short term budgeting and cash-flow needs to continue their normal business operations through the use of short-term loans.  Institutions are able to receive these short term loans because the central banks are constantly underwriting them.

During the height of the crisis, without these cash injections from the central banks, it was argued that businesses and institutions would be unable to receive loans to maintain normal business operations, and banks were squeezed by having to revalue the assets on their books.  The example doomsday scenario ultimately painted was that ATM machines would not have any cash available to withdraw, and supermarkets would not be able to maintain stock and keep food on the shelves. A very tangible Armageddon type scenario resultant of insufficient liquidity.

Many attribute a rebound in the economy, improvement of the unemployment rate and substantial stock market returns (40% from 2010-2014) to this Quantitative Easing.  However, quantitative easing is not without its critics.  A large contingent of economists believe the use of central banks to control and influence the economy ends up causing more harm than good.  A primary argument against QE is the risk of inflation, which we will discuss in a later article. 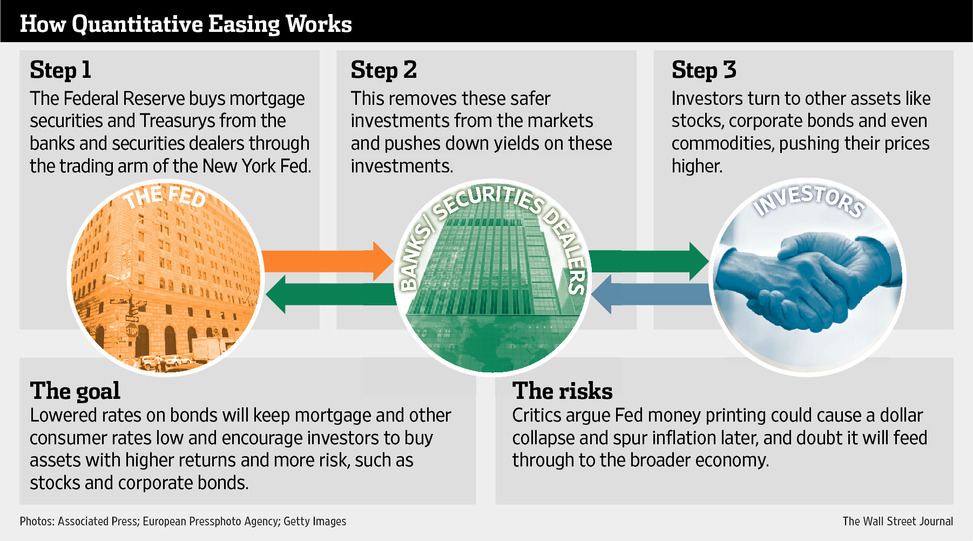 The US may be nearing the end of its Quantitative Easing, as Federal Reserve Chairwoman Janet Yellen has signaled that they are on track to wind down the asset purchasing program by the end of 2014 and perhaps even raise interest rates as early as Spring 2015.  However, the Bank of Japan has laid the groundwork for continuing with their own quantitative easing, and we may see other countries follow suit; so we do not expect the topic of QE, or the debate of its merit, to disappear from the financial headlines any time soon. Article Name
What Is QE (quantitative easing)?
Description
What is it? Why is it important?
Author
Tyton Capital Advisors
2013 TYTON | Capital Advisors © all rights reserved. The Content is for informational purposes only, you should not construe any such information or other material as legal, tax, investment, financial, or other advice. Nothing contained on our Site constitutes a solicitation, recommendation, endorsement, or offer by Tyton or any third party service provider to buy or sell any securities or other financial instruments in this or in in any other jurisdiction in which such solicitation or offer would be unlawful under the securities laws of such jurisdiction. All Content on this site is information of a general nature and does not address the circumstances of any particular individual or entity. Nothing in the Site constitutes professional and/or financial advice, nor does any information on the Site constitute a comprehensive or complete statement of the matters discussed or the law relating thereto. Tyton is not a fiduciary by virtue of any person’s use of or access to the Site or Content. You alone assume the sole responsibility of evaluating the merits and risks associated with the use of any information or other Content on the Site before making any decisions based on such information or other Content. In exchange for using the Site, you agree not to hold Tyton, its affiliates or any third party service provider liable for any possible claim for damages arising from any decision you make based on information or other Content made available to you through the Site. Always consult with your financial adviser or investment planner before making financial decisions.
Back to Top
Enter your Infotext or Widgets here...