What Do Oil Prices Mean For Investors?

OPEC- “Organisation of Petroleum Exporting Countries” – An organization consisting of the world’s major oil-exporting nations. The Organization of Petroleum Exporting Countries (OPEC) was founded in 1960 to coordinate the petroleum policies of its members, and to provide member states with technical and economic aid. OPEC is a cartel that aims to manage the supply of oil in an effort to set the price of oil on the world market, in order to avoid fluctuations that might affect the economies of both producing and purchasing countries.

You may have noticed a considerable amount of attention being paid to the price of oil recently in the financial media. The relevance and concurrent affect of these price changes reaches beyond the commodity trading community, further still beyond stock market investors and will invariably have an impact on the lives of all those operating in a capitalist society exchanging fiat currencies (money!) for goods and services.

WTI Crude (West Texas Intermediate) is a grade of oil used as a benchmark for oil pricing and is the underlying commodity of the Chicago Mercantile Exchange’s futures contracts. If you hear “Crude” or “Oil” being spoken about on the television, this is likely the focus.

Historically oil prices have been communally regulated, in syndicate fashion by OPEC . This grouping of 12 countries (including Saudi Arabia and Iraq) holds approximately 80% of the worlds crude oil reserves and over half of the world’s natural gas reserves. From whichever way you look at it this is a global oligopoly (a few entities dominating an entire industry) of fantastic proportions, which for example if happened in the technology industry, would no doubt result in legal proceedings in accordance with Antitrust law which seeks to disband monopolies in favor of free, unconstrained competition.

There is some historical correlation between the stock market and oil prices. Perhaps shedding light on the answer to the question, what do they mean for investors?

The year preceding all was not well at the OPEC table. In 1986 Saudi Arabia were disgruntled with the other OPEC members not honoring their agreed production quotas (set in aim of protecting the mutually assured profitability of the cartel) and similarly rescinded their agreement, produced at full capacity and sent oil prices spiraling downward. This is a historical example of over-supply arguably damaging the stability of financial markets outside of the commodities space. To what extent can we expect a repeat? How similar is our current situation?

Perhaps we can look for some uniformity historically, in the oil price changes amidst all of the geopolitical noise in aim of answering this question. 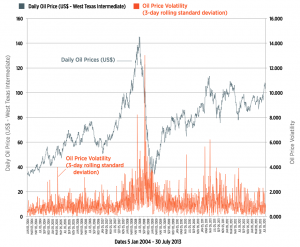 observable over 10 years, this pattern may not be coincidental…?

Currently we have another addition to deal with- the American shale revolution- another media buzzword over the past few months will probably bring you up to speed- Fracking. Increased energy efficiency and governmental drives towards promoting alternative energy – along with increased supply – have created an over-supply. The USA, Russia and Saudi Arabia continue to produce as-normal. The price goes down- but for how long? What effect will this have on the market? On the cost of bread and theater tickets?

A shale oil well operating through hydraulic fracturing can cost $9 million to get into production. When oil was hovering close to $100 per barrel, banks were more than willing to finance billions of dollars worth of oil exploration projects. As far as banks were concerned these loans were backed by tangible assets and considered low-risk. It was (almost) like printing money. A price of $80 per barrel was seen as a floor in the profitability of shale oil. This took an average break-even price of $70 per barrel, plus a $10 margin for financing costs.

Today with oil under $50, many producers lose $20 for every barrel produced and will likely default on these loans. This loss will be passed to the banks that made the loans, as it happened with the housing sector in 2008.

Simple mathematics reduces a credit-worthy company to bankruptcy – for example a company with a market capitalization of $50 million owing $9 million suddenly becomes a bad risk when its total value dives to $10 million thanks to the sudden switch from profit to loss caused by the fall in the price of oil. A loss of profitability causes a loss of share value – pension funds and investment houses have seen billions wiped off the value of their investments in a matter of a few months. The knock on effect of loss of value then permeates to the banking and insurance sectors, causing the value of stock in those companies to fall. Welcome to the next recession…or economic cycle, depending on which way you want to spin it (we’ve had a bull-market for long enough- you’ve had a fair run!)

Before you sell off your portfolio and buy a farm in Tibet it might be worth considering the positive market connotations of cheaper oil prices. Some developed markets will be squeezed until the surplus (i.e production) eases up, or demand increases- with the former seeming more controllable than the latter. Could now finally (albeit a good four years after pundits got excited), be the time to see decent growth in emerging market economies?

How about Indonesia? With nearly 253 million people, Indonesia is the most populous country after China, India, and the U.S.  Its massive and ascending middle class is consuming so much energy that the Southeast Asian nation now imports more than it exports—making low oil prices a reason to celebrate.

How about Mexico? On the U.S.’s southern flank is another country on the reform track—opening up its state-run energy industry to foreign players and ending its notorious telecom monopolies. Lately Mexico has even challenged China’s status as a global manufacturer. Such positive signs were driving up local equity valuations until late 2014, when a broad selloff in emerging markets brought the MSCI Mexico index back to earth. Increased perceived legitimacy will bring in macro investors capital and lead to expansion and development- all facilitated by (cheaper) fossil fuels. Watch this space…

How about Poland? With a strong commitment from the European Central Bank to inject liquidity to the European markets the house looks like its going to be having renovation work done over the next 24 months. Though Poland has one of the highest GDP growth forecasts in the European Union—3.3% in 2015, according to the IMF—its markets have recently been hurt by economic troubles all around its borders, from the malaise in Western Europe to warmongering in Russia. That has created buying opportunities for investors who see value in a country undergoing rapid modernization—and that, as a net energy importer, is getting a boost from cheap oil. For speculative investors, there is a strong narrative here.

Fear mongering and speculation aside, fluctuation in commodity prices will continue to have a strong influence on life outside of financial markets. For those participating in financial markets it will, as ever, be important to remain sufficiently diversified across asset classes and geographical regions so as to effectively manage risk and leave sufficient room for upside potential. 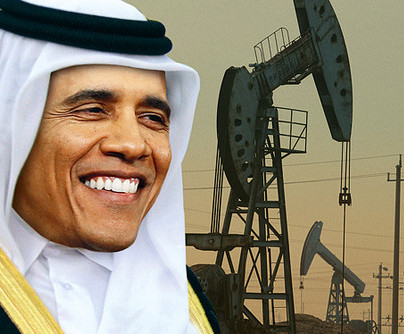 Article Name
What Do Oil Prices Mean For Investors?
Description
What do changes in oil prices mean for retail investors and what affect could this have on equity investments....
Author
Tyton Capital Advisors
2013 TYTON | Capital Advisors © all rights reserved. The Content is for informational purposes only, you should not construe any such information or other material as legal, tax, investment, financial, or other advice. Nothing contained on our Site constitutes a solicitation, recommendation, endorsement, or offer by Tyton or any third party service provider to buy or sell any securities or other financial instruments in this or in in any other jurisdiction in which such solicitation or offer would be unlawful under the securities laws of such jurisdiction. All Content on this site is information of a general nature and does not address the circumstances of any particular individual or entity. Nothing in the Site constitutes professional and/or financial advice, nor does any information on the Site constitute a comprehensive or complete statement of the matters discussed or the law relating thereto. Tyton is not a fiduciary by virtue of any person’s use of or access to the Site or Content. You alone assume the sole responsibility of evaluating the merits and risks associated with the use of any information or other Content on the Site before making any decisions based on such information or other Content. In exchange for using the Site, you agree not to hold Tyton, its affiliates or any third party service provider liable for any possible claim for damages arising from any decision you make based on information or other Content made available to you through the Site. Always consult with your financial adviser or investment planner before making financial decisions.
Back to Top
Enter your Infotext or Widgets here...