Making any investment decision based upon emotion is a categorical mistake. Being based on numbers all investment battles are fought within the arena of objectivity. It is however prudent to remember that the financial system, the “market”, was created by and is overseen by its participants who for the most part (algo’s aside!) are entirely mortal- flesh and blood and victim to the ups and downs of emotion. For investors who are curious about how emotions and biases drive share prices, behavioral finance (to be discussed in future Insights) offers some interesting descriptions and explanations.

It is this polarity in our disposition which can be seen in our evaluations of the market as being “bullish” or “bearish”, overpriced or underpriced, on a perpetual and never ending basis. Arguably the catalyst for these cyclical rotations is human fear (when prices move down) and greed (when prices move up). Even those who do not subscribe to this theory would surely agree that large price action in the markets is at least exacerbated by peoples emotional reaction to a change in the status quo- and this seldom results in rational, profit-making decisions.

Now, even non-investors can appreciate that the market moves both up and down. Fewer will be aware as to the historical regularity of this phenomenon (when we speak of crashes) and its roots in the economic/debt cycle. Picking when the next one will start/stop could make you unfathomably rich however anyone who tells you that they have this ability probably also rode in on a unicorn. We can say that the emotional cycle looks something like this. 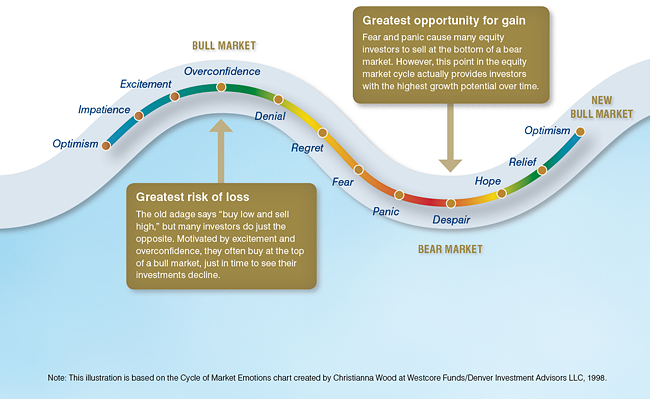 The harmful effects of these forms of investment behavior are well documented in behavioral finance literature. According to a study (Barber, Odean) of 66,465 households possessing accounts with discount brokers for the period 1991–1996 (a bullish market), those who traded frequently earned 11.4 percent return, while the overall market gained 17.9 percent.

A 2009 study of investment behavior by Dalbar showed that over the 20-year period from January 1989 to December 2008, the S&P 500 returned an average annual 8.4% but the average stock investor returned only 1.9% annually. The evidence suggests that emotional investing gets the best of the typical investor during periods of uncertainty. There are strategies, however, that can alleviate the guess-work and reduce the effect of poorly timing fund flows.

The most effective tends to be the dollar-cost averaging of investment dollars. Dollar cost averaging is a strategy where equal amounts of dollars are invested at a regular, predetermined interval. This strategy is good during all market conditions. During a downward trend, investors are purchasing shares at cheaper and cheaper prices. During an upward trend, the shares previously held in the portfolio are producing capital gains and fewer shares are being added at the higher price. The key to this strategy is to stay the course- set the strategy and don’t tamper with it unless a major change warrants revisiting and rebalancing the established course.

Another technique to diminish the emotional response to market investing is to diversify a portfolio. There have been only a handful of times in history when all markets have moved in unison and diversification provided little protection. In most normal market cycles, the use of a diversification strategy provides downward protection. Diversifying a portfolio can take many forms – investing in different industries, different geographies, different types of investments and even hedging with alternative investments like real estate and commodities. There are distinctive market conditions that favor each of these subsectors of the market, so a portfolio made up of all these various types of investments should provide protection in a range of market conditions.

If you are able to divorce your feelings from your relationship with your money then you will invariably receive better returns in the long-run irrespective of varying market conditions. Making reactionary decisions, following the crowd and being influenced by others will lead exclusively to poor decision making that will in turn facilitate the profit-making of other, more objective investors who invest unemotionally.